How would you define blockchain?

How is blockchain being applied in the public sector?

How will it evolve in the coming few years?

Would it make the governance model fully centralized?

Can we totally trust on blockchain?

So in Catalonia, we should go in a more global network?

Could the anonymity be used to a hackers advantage?

How is the future for employees (e.g. in banks) affected?

How many years will they need to make the change?

Could this tech lower efficiency in the public sector?

Lluïsa is the Technological Innovation and International Action Lead at Generalitat de Catalunya and also the founder and president of Intelligent'Er Re'Development, an international think tank that uses digital intelligence to rethink global development challenges with a decentralised citizen-centric perspective. Their approach to challenges is systemic and holistic and, in an attempt to square the development circle. They also run The Collaboratory, a community of experts to promote intelligent and proportional development.

She worked for governments in the UK and now in Catalunya, at the Catalan Energy Institute. Her academic career includes the creation and direction of world’s first official scientific master’s program in smart cities, and several competitive and commercial research projects in the domains of smart and sustainable cities. She served as UN Habitat III expert and she currently holds a second mandate as a chair at UN’s U4SSC initiative, this time to explore Blockchain applications for cities. Her expertise on blockchain has awarded her with the Presidency of the Blockchain Catalunya Association.

How would you define blockchain?

Well, there is a distinction to be made between blockchain and distributed ledger systems. It’s essential that we discuss these first. Blockchain is part of a distributed ledger system or distributed ledger technologies, which are technologies that are distributed, but they can be or cannot be decentralized. The main thing regarding blockchain is that it’s distributed but also decentralized. So that’s important thing to highlight here. It’s essentially a huge computer. For instance, for Bitcoin you have about 20,000 computers, miners who secure, register and capture transactions to build the blocks. Those transactions are anything that you and I (peers) send across the network, and these are packed and organized into blocks and the blocks are what builds the chain.

Basically because there is no central authority, everyone is responsible for the network. So it’s a collection of computers. As I said with Bitcoin, we are talking about 20,000 computers distributed across the globe, synchronized and working at the same time, capturing and securing transactions. All computers have the chain. So, in other words, the blockchain is replicated in each and every computer securing the network. This is what makes it so secure. If one computer fails or leaves the network, you still have the rest of them working properly. If the other DLT system crashes, their servers crash and it’s all gone. Or if the servers are hijacked, you would need at least 51% of the nodes, 51% of those 20,000 computers working against the network, which is very unlikely.

And how is Blockchain technology right now being applied in the public sector?

Blockchain is not used by any government, because governments are central authorities. So they have to look at the other version of the denominator. The DLT as DLT. Especially in Nordic countries like Norway and Sweden, you have attempts to on public land registries, experiments with public auctions of confiscated goods made on the DLT, and things like that. You also have experiences in the middle East, in the UAE, and in the US. In the US they look at the technology for issuing certificates of birth, marriage, and things like that. There are different use cases across the globe, but always using DLT because you have someone responsible for that issuance of the transaction.

In what specific areas could the use of Blockchain improve governments?

Blockchain is a technology from the people to the people. So

if we use blockchain systems we would allow for more public participation.

So we could decentralize governance in a way that we pass on decision making to people. Because you could use blockchain to build consensus mechanisms to do all the decision making involved in that. So we could evolve governance to the people instead of being held just by the city council, by the regional government or even the national parliament.

How do you think it will evolve in the coming few years?

The evolution of Blockchain is very uncertain because the adoption is quite poor.

And since we do not see the technology being used in our daily lives, it’s hard to predict how this will evolve for the moment. Although it’s 10 years old, we are still in the early ages of the technology. It’s a little bit like the internet, it was born in the 80s but it started being used more widely in the early 90s. So it took 10 years plus to predict what the internet would be. So we are close to knowing about this, but we are not yet in a position to make those statements.

In terms of the government applying it with would it make the governance model the fully centralized?

I think so. You have to understand the decentralization of governments as you would understand an election. When you send people to the polling station and they have to choose between candidates to form government, they submit their decision, in this case on paper, and in the end the future president will be whoever holds more votes. So the same thing would happen when we talk about decision making in government. You would have a choice of options that would be in first instance presented by people themselves. You as person could submit something to vote and then the community would decide what the best proposal is and then implement whatever has more votes. And the tool that enables that already exists is what we call the DAOs. They are a specific subset within the portfolio of blockchain tools. You have smart contracts, crowd funding mechanisms, transactions, and DAOs, which are decentralized autonomous organizations or self–made decision making mechanisms. Okay. So the technology exists to make it happen. And there are communities that use DAOs for their own self governance. 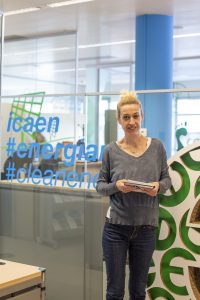 Would you say we can totally trust on blockchain?

Yes. In the 10 years of existence of Bitcoin, it has never been hijacked because it’s impossible. There are plenty of forms of attacking the internet, whereas with blockchains it’s impossible. What makes it so robust is the mining community. So the larger the network, the more secure it will be.

So for example, in the case of Catalonia, we should go in a more global network?

So one of the benefits of blockchain is that anything of value can be transferred and saved confidentially. Could this anonymity be used to the hackers advantage?

In the past you had people who were using the network the wrong way. Anonymity can be used to transact prohibited goods or to do malware activity. We had the example of Silk Road. Silk road was a black market for drugs, guns, and also all sorts of prohibited goods. And it was built on the Bitcoin network. It was dismantled by the network itself.

There is some sort of vigilance or network surveillance because it’s in the interest of the network to be healthy and to have good purposes. So this sort of self vigilance eliminates malicious activity when one is detected, but sometimes it takes a while.

How do you think the future looks for people that work, for example in banks, and would be affected by blockchain?

Very promising if they understand it.

It’s absolutely true that blockchain gets rid of the middle man. So because we transact directly peer to peer, we don’t need someone to do those things for us. So these middlemen positions and services have to reinvent themselves and they have to look at areas that are yet to be covered within the blockchain technology. For instance, blockchain is not user friendly.

When you want to transact you have to go to the Bitcoin network, which is something very hard to use for a normal user because you have to have a wallet and all sorts of strange tools that are not very easy to use. And I think those middleman positions should be looking at developing user–friendly layers to make it more accessible instead of building fake blockchains (that are actually DLTs). They should be embracing the technology and developing apps and layers that will make it easier for you and I to use. I think the business opportunity for them is to reinvent themselves in that direction.

How many years do you think they will need to make the change?

It’s very simple because the medium is there. They have the knowledge because they know the market, they know their business. They just have to start doing it. They might not do it if they don’t find it attractive in business terms. But I think there is a business case there. I’m not them, so I cannot tell you, but I see the business opportunity clearly. It’s another thing if they take it.

Could they use of this technology in the public sector in reality decrease efficiency when it comes to governments?

If we would use Blockchain to handle our identity, you would have just one identity that would be shared across the network and could be shared across all government services, so it would make it easier for you to be identified and it would require less bureaucracy. You would have your identity connected to your wallet, unique and tokenized, meaning that you could share it with anyone who you need to and it would make it more efficient compared to what we have now, which is mostly based on paper and you have to sometimes identify yourself several times before each and every government body. So using Blockchain would definitely be more efficient.