Is there an emergency regarding the energy resources needed by AI?

What would be the second way to look at this emergency?

And why are we failing to ask that question?

So, for you, the fundamental debate is ethics, right?

Technology has been extremely helpful in the current pandemic crisis.

Have we been in this situation before?

That's also one of the causes of the climate emergency nowadays.

Ravi Rajan is a Professor of Environmental Studies at the University of California, Santa Cruz, and a member of the Greenpeace International Board of Directors.

Ravi has three broad research interests: a) the political economy of environment – development conflicts, b) environmental human rights and environmental justice and c) risk and disasters. But in all of them underlies one problem, he says: the lack of global ethics.

Is there an emergency regarding the energy resources needed to develop deep AI?

One can answer this question in two ways. In terms of pure energetics, it’s kind of widely known that it’s not energy neutral to have these large clusters of server farms. In fact, campaign organizations have been on it for a while.

Now, this is not just a AI. This is all of computing. This is server based computing. And there has been a response to that trying to make many of these servers as green as possible and to derive their sources of energy from non fossil fuel sources. But this gets complicated again […] So one can question whether or not the the shift of server farms from non-renewable into renewable sources of energy is really in that sense as great as they are made up to be.

The other dimension is substances that go into these solar farms, things like cobalt, which are really the blood diamonds of today.

But then we’ve got cell phones in our pockets. And a lot of the ingredients in those cell phones are, you know, not very different in some respects from the blood diamonds.

What would be the second way to look at this emergency?

So that’s one kind of take on this, purely looking at the energetics. But regarding AI itself, the focus to me is more a question of who we are, our self identity as human beings. Our ethics in terms of interpersonal relationships, our relationships with each other, our duties to each others, to nature, notions of autonomy, nature, sacred…

And why are we failing to ask that question?

I think that for a generation or two or three we’ve got rid of religion from our discourse. We’ve separated our governing states from religion – now, there are good reasons for that because religion has been deeply problematic in so many ways as well. But, unfortunately, we couldn’t replace it with a with a sense of what is a moral approach to me. And this is not new. The Germans tried it with the idea of an ethical economy in the late 19th century, when modern systems began to evolve and modern states began to evolve.

The same thing happened in Britain with moral cites as the replacement for religion. In other words, you can have rationality and modernity without talking about gods and churches and so on. But somehow, even those kinds of initiatives died to the extent that ethics began to be subsumed within economics.

[…] If you look at Aristotle’s idea of the economy, you know, economy was a part of ethics. The market was one of the oldest human institutions. But it was governed with ethical principles.

So, for you, the fundamental debate is ethics, right?

In a sense, this is one of the biggest questions of the day, to reframe our global discourse, whether it’s about nature, climate change, pandemics, technologies, whatever it is in terms of some kind of ethical discourse.

[…] And in every every aspect of our lives, including education, politics, every aspect of it, ethics is getting lost. And that, to me, is one of those big questions that we need to address. 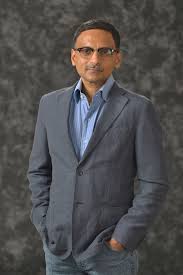 Technology has nevertheless been extremely helpful in the current pandemic crisis.

Many of these technologies are liberating. […] 20 years ago we would have been unemployed at this point because with the pandemic there’d be nothing to do. I mean, in that regard, these things are tremendously useful. And the very fact they will possibly be able to get a vaccine in the course of a year, possibly a year and a half…Let’s not throw the baby out with the bathwater.

It’s a case of circumscribing it within some kind of ethical discourse. We don’t talk about this anymore because we don’t have a moral frame of reference, but cultural ones. We’ve seen it with the whole energy debate in this country (USA) for example – ‘These educated guys are talking about the pandemic and we don’t like them, so we shut out the pandemic over and deny climate change.’ In all sorts of things are cultural manifestations of fissures.

We don’t have an ability to communicate logically because there’s no common reference framework to talk about ethical disputes. And now it’s a much more heterogeneous kind of universal world that we have to deal with and we have to forge some kind of thing that says ‘OK, here are the limits. Go ahead. This is who we are as human beings.’

Have we been in this situation before?

We had a discussion after the Second World War where people said ‘This is ridiculous. You can’t let a free for all happen in this way to the point that there’s such widespread destruction.’

So for a few years after that, maybe up to the 60s or 70s, there was some kind of an attempt to try to create a moral worldwide. By the 80s we went back to the non ethical discourse, which meant that it was all a free for all world of economic goals. That is the only ethics in town. […]Then, the idea of the self became identified with cheap goods, which is concomitant with the rise of China.

That's also one of the causes of the climate emergency nowadays.

The reason China is very plausible today is because you and I get very cheap things. We can buy commodities that are extremely inexpensive and which if we paid real wages for, we wouldn’t be able to afford. So it’s not China bashing- what I’m trying to say is that we are all responsible for the world have co created.

This is just one particular group, and a particular case. But it’s a world that we created and it ended up decimating ed systems. It ended up in a planetary crisis in terms of global warming and massive scale which accelerated in the last 50 years. It would have gone up anyway. Mass production has developed greatly. And we haven’t really talked through it.

We need to have a global conversation on what that means and that, to me, is the key. One of the big tasks we have, we can’t leave it to the U.N. to do it. It’s going to have to happen some other way.

So what can we do?

If there are ethical rules about something that’s part of joint discourse, things can happen. You see this with George Floyd in the police case right now where there is a kind of a real ethical upswing.